Request a call back

Request a Call Back 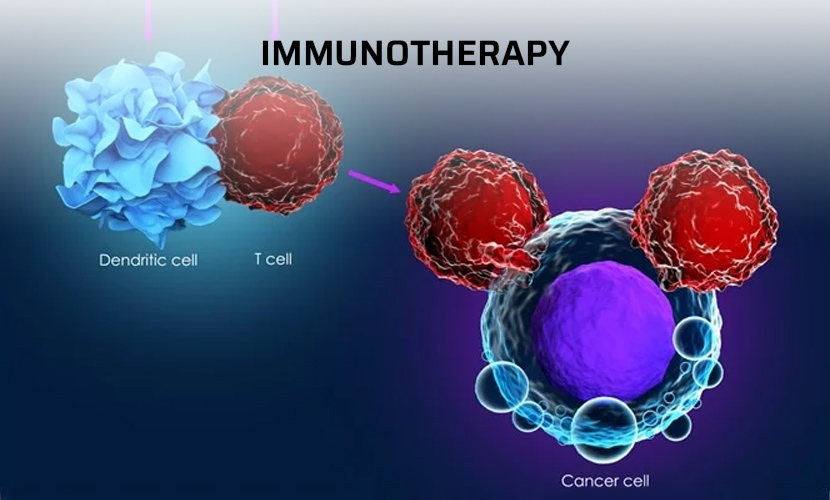 Immunotherapy is a cancer treatment that makes use of the body's own immune system. Immunotherapy comes in a variety of forms, each of which acts in a unique way. Checkpoint inhibitors are the most common type of cancer immunotherapy, and they work by removing barriers that prevent the immune system from detecting and attacking cancer.

Immunotherapy can be used alone or in combination with other cancer therapies. It's typically used when cancer hasn't responded to or returned after initial treatment. It may be available as part of the initial treatment strategy in some circumstances. Other methods of immunotherapy activate the immune.

The immune system is made up of cells, chemicals, tissues, and organs that work together to keep you healthy. The lymph nodes, spleen, thymus, tonsils, and bone marrow are all part of it, as are lymphocytes, which are white blood cells. This network works together to defend the body from infections as well as aberrant cells like cancer cells.

When a germ enters the body or a cell becomes aberrant, the immune system recognises and destroys the germ or cell to prevent it from harming the body. Immune response is the term for this process. Every germ or aberrant cell that the immune system has killed is remembered so that it may easily recognise them if they reappear in the body.

Cancer and the immune system

Checkpoint inhibitor immunotherapy has helped some patients, but it does not work for everyone. It can be used to treat cancers such as bladder cancer, head and neck cancer, Hodgkin and non-Hodgkin lymphoma, kidney cancer, liver cancer, lung cancer, melanoma, and Merkel cell carcinoma.

The majority of patients who have received checkpoint inhibitors have had advanced cancer. Immunotherapy is starting to become available for some cancer types at an earlier stage.

Even if immunotherapy is suggested, it is impossible to determine if it would be effective due to the wide range of success rates. Your doctor will consider the following factors when determining whether immunotherapy is a viable choice for you.

Curious to know more about Porvoo Transition Care? Feel free to contact Us.

At Porvoo, our patient’s recovery process is supervised by a team of adept medical professionals.